Chad has always found the Jingle for the company called Poulins to be intriguing so in July of 2020 he suggested to his wife that he’d like to create a jingle for the company. On August 4th, 2020 he was out at his Birds Hill location fixing bikes when he bumped into his old friend Grant Simpson and his partner Shauna Jones. Not remembering Grant’s vast musical abilities he mentioned that he’d like to have a jingle for his company. To his surprise, Grant had written jingles for other companies and was excited about the possibility of coming up with one for Bee2gether Bikes. To Chad and Kim’s surprise, the very next day they received a sound file with a preliminary concept of the song he had written. We fell in love with it right away and Chad suggested the idea to make the song build by layering voices to demonstrate the power of coming together and to add a kazoo to simulate bees buzzing through the air. On August 12th Chad and Kim had a recording session with Grant at their house which went well. 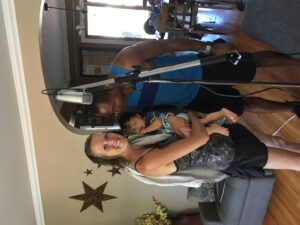 After hearing the first demo Chad and Kim recorded in their house he thought it would be best to book time in his friend’s studio who he had worked with before on a few other projects. Fortunately, Derek Benjamin from Derek Benjamin Music was able to book everyone in his studio with short notice to record all the voices. In one 2 hour session the voices were recorded (7 parts in total 3 sung by Chad, 2 by Kim, one sung by Shauna, and one by Grant) and the final percussion parts played by Dylan Holmberg. The next day the finished product was sent to Chad via email and it was sensational!! In Chad’s first time listening to it in his convertible Mini Cooper his son Kamani requested it be played 15 times.

*feel free to download the song and record your family singing it. Post it to #bee2getherbikes or send it to chad@bee2getherbikes.com for your opportunity to win free 1 hour rides